On 18 April 2013, the channel launched in Canada as “ATN Sikh Channel” through an exclusive licensing agreement with the Asian Television Network 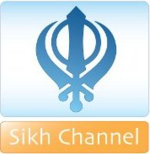