Flava was a British music television channel owned and operated by Sony Pictures Television. It was launched in June 2004 and was formerly called B4 TV, a previous pre-launch music channel from CSC Media Group. Flava broadcast for 24 hours a day and played music videos from the hip hop, R&B, funk, UK garage, reggae, dancehall, grime, jungle, dubstep and drum and bass music genres.

The Flava logo was on screen in the top left-hand corner during music videos and song information appeared at the bottom of the screen at the start and end of each music video. The logo was also seen before and after advert breaks when it was shown in the middle of the screen. Flava closed on 1 November 2017. 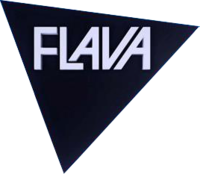