Alibi (stylised as alibi) is a British digital television channel broadcasting in the United Kingdom and Ireland, as part of the UKTV network of channels. The channel launched on 1 November 1997 and relaunched in its current format on 7 October 2008. The channel is available on satellite through Sky, on cable, primarily through Virgin Media and on IPTV through BT TV, TalkTalk TV and TVPlayer (When subscribed to TVPlayer Plus). 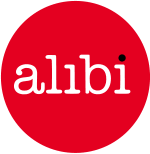