4Music is a music and entertainment channel in the United Kingdom and available on some digital television providers in the Republic of Ireland. The channel launched on 15 August 2008, replacing The Hits. It is the only Channel 4-branded channel within The Box Plus Network. It is available on Freeview, Virgin Media and Sky. On 2 April 2013, all Box Television channels went free-to-air on satellite, apart from 4Music which went free-to-view. As a result, the channels were removed from the Sky EPG in Ireland. However, 4Music went free-to-air on February 7, 2017 and launched on Freesat, replacing The Box.

On, 25th September 2017, 4Music received an update to its on-screen graphics, revolving around four squares which extend to create the 4Music logo animate to form the artist credit. 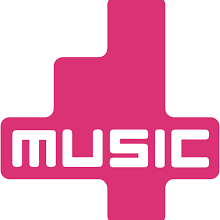